When talking about chicken recipes, it’s hard to deny that there is one dish in particular that stands high above the rest, casting its crispy shadow on the lesser foods over which it rules. That dish, of course, is fried chicken.

Many people shy away from fried chicken because of health concerns. If this describes you, we have some good news. While we will admit that fried chicken should definitely not be a daily indulgence, most people tend to overestimate its calorie count. Gram for gram, fried chicken is only slightly higher than beef in both fat and calories, and it’s still higher in protein and most vitamins and minerals.

Now that we’ve alleviated your guilt, let’s talk about the most important part of fried chicken: its deliciousness. There’s a reason that almost every culture has a version of fried chicken in their culinary heritage. They’re all different, but there are certain characteristics they all share that make them uniquely fried chicken.

The perfect fried chicken is crispy on the outside, with a flavourful crust that contrasts and complements the tender chicken it contains. The starch is deeply browned, allowing the complex flavours created by the Maillard reaction to shine through, without letting anything burn. The meat is perfectly seasoned, and cooked to the point of being tender, but still moist.

To begin, let us consider its components:

Starch. This is what creates the crust, and various choices dramatically affect texture and flavour. Plain old flour is the most common choice, but potato starch is commonly used in Japanese and Korean style fried chicken, and corn starch is often used in Chinese styles.

Herbs and spices. There’s no secret here. Seasoning the starch before dredging the chicken adds flavour and will set your fried chicken apart.

Brining. Even if you typically skip the brining step on your roast chicken, you’ll want to reconsider when it comes to fried chicken. It’s an easy step that adds flavour, locks in moisture, and tenderizes the meat. Whether you use salt or buttermilk, brining can make all the difference in fried chicken.

Meat. Choosing the right cut of meat is important. Consider using boneless, skinless chicken thighs. Not only is the dark meat juicier and more flavourful, it can also withstand higher temperatures, meaning you can get that extra-crispy coating without drying out your chicken.

Cooking. Despite its specific name, there are many ways to cook fried chicken. In addition to the traditional deep-fry, fried chicken can easily be made in the oven, or through a combination of the two.

How to Make Classic Fried Chicken

Step 1: Brine and marinate the chicken In a sealable food container or Ziploc bag, combine enough buttermilk to cover the chicken, about 4 cups, with your choice of seasoning. Place the chicken pieces in the marinade, seal, and let sit for at least 30 minutes. The longer the chicken marinates, the more flavourful it will be.

Note: Not sure what seasoning to use? Try a mix of cayenne, paprika, garlic powder, salt, and black pepper. Place your seasoned starch of choice in a large, shallow bowl. Dip your marinated chicken pieces into the dredging mixture.

If you’re feeling adventurous, dip your dredged chicken back into your leftover marinade, then again into the dredging mixture. Double-dredged chicken fries up nice and crispy.

Note: If you like your crust crispy and rugged, we recommend incorporating two tablespoons of marinade per one cup of starch into the dredging mixture. This added moisture will give dimension to your crust. In a Dutch oven, skillet, or thick-walled stock pot, heat your oil to 350°F. Be sure to use an oil that can withstand high temperatures without smoking or burning. Peanut and canola oil are common choices. Once the oil is heated, lower in your dredged chicken pieces one by one. Try to work in small batches – crowded chicken doesn’t brown as evenly. Let the chicken fry until the bottoms are crisp and brown, then flip. Once the chicken is golden brown and cooked through, remove from the pan and place on a paper towel or paper bag to absorb any excess oil. Finally, place on a wire rack to cool and dry.

There is an endless variety of fried chicken styles out there. Here are just a few of our favourites to get you started.

For a healthier take on the traditional, you can make your fried chicken in the oven. Simply place your dredged chicken pieces in a greased baking pan and cook at 375°F until the meat has an internal temperature of 160°F, about 15-20 minutes.

If you still want that extra crispy coating you get from frying your chicken, you can also use a combination method. Quickly fry the chicken on both sides and then place in a baking dish in the oven until the meat is cooked through. This will minimize the amount of oil absorbed by the chicken, and help it retain its moisture with the lower cooking temperature.

Chicken-fried, or country-fried chicken, differs from the traditional fried chicken in two distinct ways. First, the chicken is tenderized and flattened by hand before it is marinated in a seasoned buttermilk mixture. The chicken is then battered and fried, and served topped with a delicious, creamy, chicken gravy.

This Japanese fried-chicken rivals its North American cousin. Not only does it pack a punch of flavour, it’s also gluten-free! Karaage chicken is first marinated for up to 24 hours in a blend of soy sauce, ginger, scallions, sesame oil, sugar, and buttermilk. Then, instead of flour, this fried chicken calls for a potato starch coating, which gives it its trademark thin and extra-crispy crust.

If you’re looking to bump your fried chicken up a notch, look no further – hot chicken brings the heat! Hot chicken gets its name from the fiery blend of spices that go into its saucy coating. Double-coated and fried, the chicken is then given a wet application of delicious sauce. Serve on a slice of white bread with a pickle and you’ve got yourself a southern classic.

Whatever your culinary style, there’s a fried chicken for you. Who could resist a Southern classic like chicken and waffles. This may seem like a lot of work for brunch, but trust us it's worth it! 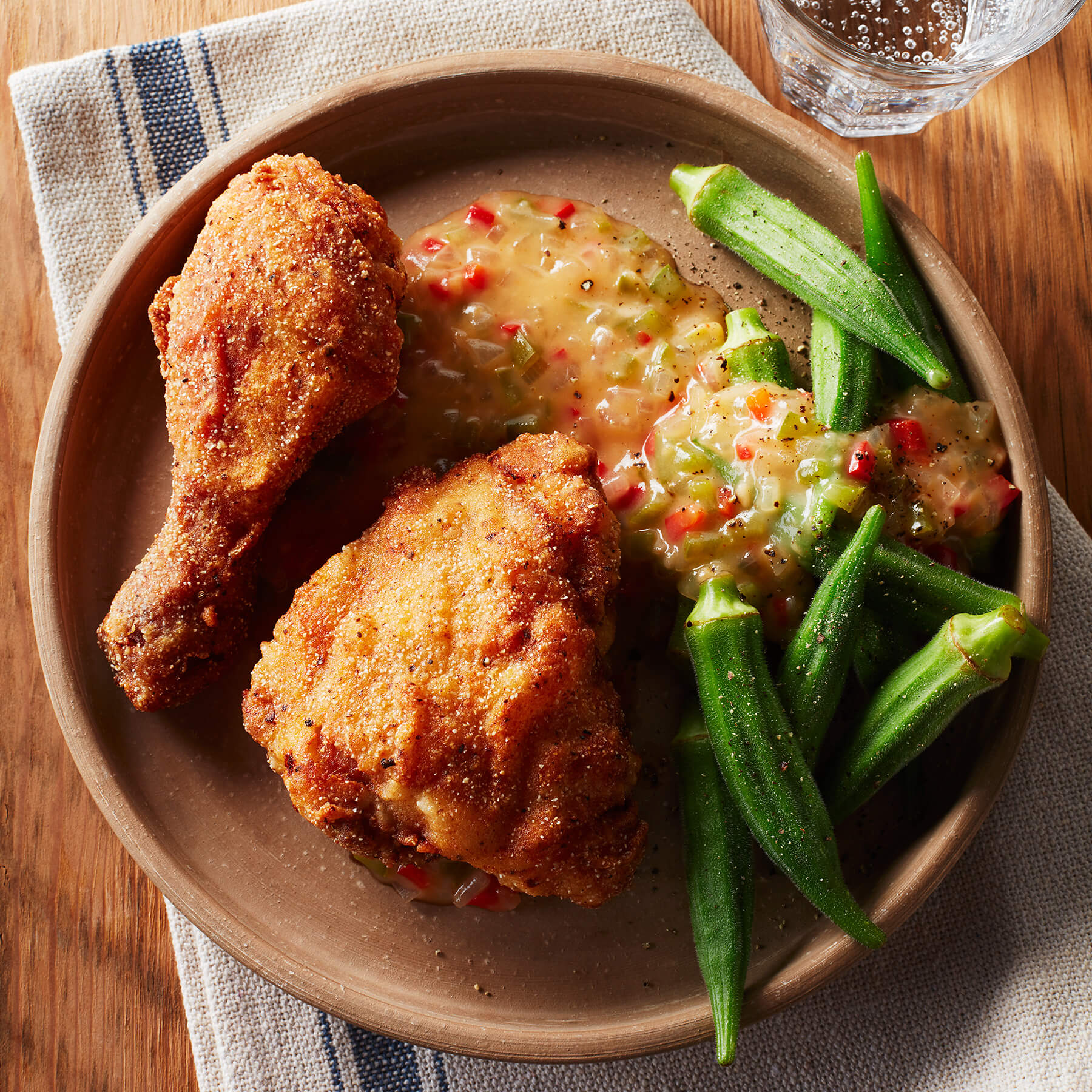 This is just one of the methods I use for fried chicken. Trust me if you try this you’re going to play with this one forever.